What To Look When Selecting a Gaming Video Card

Are you considering a new video card, but don’t know what qualities to look for? No need to worry, because this article will help you understand the specifications that impact gaming. There is quite a lot of information regarding video cards, so identifying the various performance aspects is crucial. You will have a better gaming experience with an advanced graphics card, so we recommend selecting one based off of game preference and price. 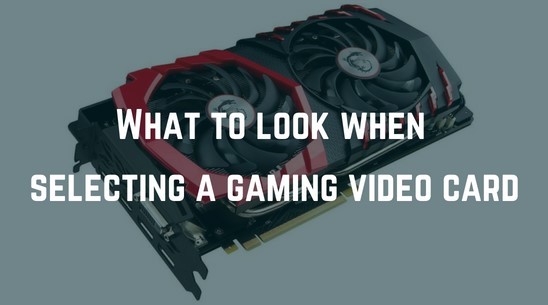 To begin selecting a video card, the bus interface is an excellent place to start. There are two options for you to choose from, those being AGP and PCI interface level connections. If you are still using an AGP oriented video card, I recommend upgrading your system to something more advanced that could handle a PCIe graphics card. I’m not going to bother writing about AGP based cards, as they are out-of-date with the current level of gaming. Instead, I wish to focus your attention towards the newest interface, PCIe, which I highly recommend.

The qualities to look for are simple, and the advantages are somewhat alarming. Not only do video cards that use the PCIe interface benefit from a significant boost in performance, but more than one video card can be set up to run simultaneously, varying from a two card setup, all the way to a 3 – 4 card setup. An AGP based motherboard can only run one video card! Whats up with that!? So please, do yourself a favor, be sure to invest in a video card that will benefit you in the long run. In case, if you are on a tight budget and want to upgrade your gaming PC then you can go for Best LGA 1155 CPU. It comes under budget price and you will get a good gaming experience.

When you purchase a separate video card directly from the manufacturer, it usually comes with its cooling device, typically a fan or heat sync. Since this is a performance-based video card we are talking about, which may use 1 – 2 GPU’s, stick with an active cooling device. This uses heat sync plus the help of a fan to increase the rate of heat dissipation from a constant air flow. This is one of the primary methods of cooling modern CPU and GPU, so I recommend purchasing a third party device to ensure this cooling component sufficiently removes the heat.

The graphics processing units performance is based around its Core Clock Speed, which determines how fast images are displayed on the screen. This is similar to the renditions a typical processor performs, instead pixel imagery is being analyzed and calculated. These performance-based graphics processors can come with high clock speeds, typically between 2500 to 5000 mh/z, but for FPS to be decent, the onboard memory, memory format, memory width interface, and memory bandwidth must operate accordingly.

Discussed here are attributes related to a video card dedicated memory supply, broken into subtasks for you to quickly understand. This info can help you make comparisons between video card manufactures by analyzing their technical specifications and more.

The memory capacity for new video cards hasn’t reached a substantial amount yet, but various cards utilize at least 1 Gb/s worth to improve function and the fill rate efficiency. As always, you should aim for the most significant amount available to enhance performance and have enough memory to supply tomorrows next big game. One word of caution though, be aware that the bandwidth must be able to transfer data on the width interface at a decent speed for more significant amounts of memory to work correctly. This can cause an unwanted bottleneck in your systems core features if not taken seriously, which will affect gaming to a certain degree.

The memory bandwidth is a measure of the data capacity that can be moved from the dedicated memory supply to the GPU that requested that information. The reason this specification is so significant has to due with how much memory the GPU(s) have to work with and how fast this data can be transferred. If you have a significant amount of memory and don’t have the proper capacity to transfer data at, what good is a large memory capacity when its bandwidth capacity is unsatisfactory? The point is, prioritize the bandwidth above the capacity you intend on using.

The memory type dedicated to video cards is another crucial factor. VRAM, as it is called, is a particular type of DRAM, which utilizes a dually ported structure, allowing the GPU(s) to write data simultaneously to the memory modules at the same time the display is being refreshed with a new image. I recommend variant types of GDDR3, GDDR4, and GDDR5 as these formats have higher clock frequencies, faster read and write ratios, and lower power consumption levels to benefit gaming.

Memory “bus,” width are the channels the memory uses to transfer data to and from the GPU(s). Technically, the memory width manages how much information can flow every clock cycle. Think of a memory bus as a highway, consisting of many lanes, and the speed at which data can travel is dictated by the bandwidth, or the speed limit. The more full the bus, or from the example from above, the more lanes data can travel on, the more information that can be transported simultaneously. You should aim for a wider bus, which is generally used for performance-based cards.

API or Application Programming Interface – What Game API’s do

The technologies that game applications use to render 3D scenes, commonly use OpenGL and DirectX (DirectX 3D) standards. These API’s are what game programs use to define how the visuals of a game are processed and displayed on the screen. Look for the most up-to-date versions of DirectX and OpenGL to ensure cross-platform games work accordingly. Though, if you feel confused on what version to get with your graphics card, check your preference of games level of support for current API’s.

After a graphics card processes images, they then must be uploaded to a display. These are the typical standards used amongst gamers and professionals.

This is the most popular high definition format being used today. This is commonly used with flat panel LCD monitors. DVI usually comes standard on the majority of video cards, though you should check the map you intend on buying to ensure this format is supported.

HDMI is another high definition display format used for gaming PCs today. It has the same quality image production as DVI but offers audio support for enhanced gameplay. You can purchase a card with these adapters, though they make devices that connect DVI to HDMI if you wish to buy another graphics card.

This is a variation of TV-Output, which allows you to connect your gaming system to the television of your choice. A vast amount of video cards supports this format, but its always good to check compatibility. You may want to consider HDMI or DVI as another option, as this formats bandwidth isn’t up to par, making it unsuitable for high definition TV.